One of my favorite vegetables to grow is garlic. It doesn’t take up much space in the garden and it is much better than most of the garlic that is readily available in grocery stores. In the summer the farmers markets often have great garlic producers who you can use for your source for planting your own. Talk to them and try a few different types and plant what you like best. I have found some types of garlic that I try to keep going each year. The time to plant is in October and the time for harvest starts in July. Each clove of garlic produces one head when planted. It is important to start with large heads as large cloves produce bigger heads of garlic.

The reason I’m mentioning garlic on my olive oil blog is – pesto. Not just your regular basil, pinenut, parmesean and olive oil type but Scape Pesto. 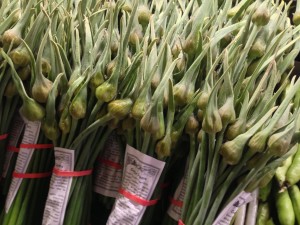 I just made some pesto as my garlic had formed scapes. Scapes are the curly gooseneck looking flower buds of the garlic plant. They usually start forming in June. It is in the best interest of the developing bulb of garlic to remove these. I cut them and make a pesto that is so delicious. You probably don’t have scapes unless you planted your garlic last fall but the farmers markets may have some. If so give it a try, it’s super easy and it may get you thinking about planting your own garlic. You do need a sunny location with good drainage to grow garlic. It should be possible to grow garlic in pots if you don’t have garden space.

Here is my recipe for

Put all the ingredients in the bowl of a food processor and blend until smooth. I like it with a little texture.

It will keep for several days in the frig or you can freeze it.

It can be served with pasta or crostini.

If you don’t get our e-mail newsletter, you may want to sign up. Keep up to date on the latest olive news from Umbria and great deals on our oil. We also include some great recipes that feature Amelia Oil

‘Tis the season to cook and eat soup. Last night I made a hearty winter minestra (Italian for vegetable soup) with kale, carrots, white beans and fennel. Just before serving, I topped each bowl with a drizzle of Amelia Oil. Extra virgin olive oil really shines when used for finishing soups; the heat opens up the rich complexity of the oil.

Give it a try and see how a touch of our olive oil can add another layer of flavour to soups, pasta and grilled vegetables.

I love it when people write in with questions. Recently, someone asked if you can fry with olive oil and if it was a healthy choice. First of all, no matter what oil you use, fried food is probably not the healthiest choice (but it is oh so good). That said, olive oil has its ups and downs for frying. Compared to grape seed oil or other seed oils, olive oil has a relatively low smoking-point (375-400F), which means that you will get a lot of smoke if you aren’t careful about the temperature and this could give your food a burnt taste. The other issue of frying with olive oil is that olive oil loses some of its properties when fried: those lovely green tastes are the first to go. However, there are no real negative effects of frying with olive oil  and there are certainly few health risks (other than the usual health issues of fried foods). Olive will not become a trans fat on your kitchen stove.
There are not many people who use extra virgin olive oil to fry; this is mainly due to the cost and the fact that it loses a lot of its delicate flavours when heated too high. In Italy, olive oil is still the first choice for frying but often virgin or pomace oil is used (low grades of olive oil). Olive oil also imparts a strong flavour to whatever it is you are frying. This can work really well with some types of fish, for example.

My recommendation is to save your good extra virgin olive oil for finishing dishes. I use it as a condiment to add a little something to soups, pasta, salads as well as grilled meats and vegetables. I have also been known to put it on my toast in the morning, but that is quite extreme. 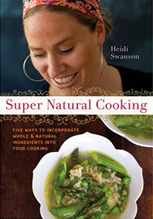 I have become a big fan of Heidi Swanson’s food blog, 101 Cookbooks. The photos are appetizing, the recipes turn out well and the writing is top-class. I noticed that a new recipe for olive oil crackers has been posted and I thought you might be interested. They look delicious and apparently they are easy to make. Why buy over-priced crackers when you can make them yourself from things you probably already have at home. 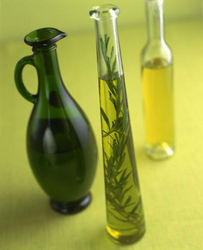 Are you trying to get rid of your old olive oil before buying your stock of 2008 Amelia Oil or have you been wrecked by tasting the good stuff and don’t know what to do with your old supply? Why not make some herb-infused olive oil.

I would not recommend using high-quality extra virgin for this operation because what happens is that any organic material introduced into the olive oil begins a process of oxidation, slow turning the oil rancid (over a long period of time). In addition, the flavouring you add essentially takes away from the flavour of the olive oil.

7 small hot red Italian peppers, dried (adjust amount according to how hot you like it)

Put the olive oil, whole garlic cloves and red peppers in a container or a bottle that you can get everything out of again. Cover and let your ingredients infuse for 2 days. Remove the garlic. Transfer the remaining oil and ingredients to the final bottle (I always look for an interesting bottle) into which you have carefully added the sprig of oregano leaving enough room for a cork. Let the oil infuse for another few days. You may want to adjust the quantities to suit your own tastes.

This infused olive oil adds a hit of heat to pizza or red pasta sauces. It also makes a great gift. You can also expert with other herbs such as tarragon, basil or rosemary. Do you have some suggestions you’d like to share? Leave a comment. 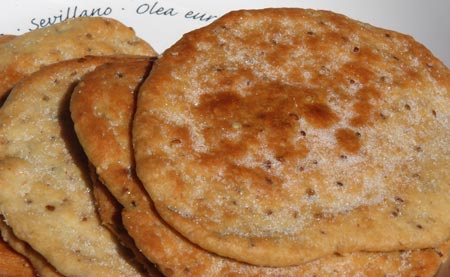 I am always looking for good recipes to showcase our olive oil. However, Sean found this great recipe on the Wild Yeast blog and I wrote to Susan to ask for her permission to repost her recipe here. She kindly agreed. Thanks, Susan.

Oh my goodness. When my daughter went to Sevilla, Spain two summers ago, she brought back some tortas de aceite, the crisp, lightly sweet olive oil wafers traditionally made there, and I was in love.

Imagine my delight when, paging through Penelope Casas’ excellent La Cocina de Mama: The Great Home Cooking of Spain, I found a recipe for tortas de aceite that calls for leftover bread or pizza dough. I had that leftover dough! And in short order, I had those tortas. I was in love all over again.

I made these a few times and discovered that either pizza dough (made with a bit of olive oil; my dough was left over from making grissini), or a basic French bread dough (no oil), can be used. I refrigerated the dough after the first fermentation and kept it a day or two before making the tortas.

I also found that incorporating the generous amount of olive oil into already-developed dough was neat and quick with a food processor, whereas by hand it was a bit messy, though certainly doable. Take your pick. 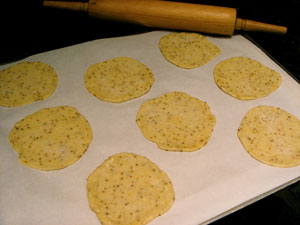 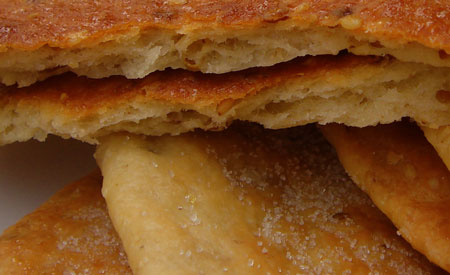 Enjoy these with morning coffee, or any time. If by some miracle they’re not all gone within a few hours, you can wrap the wafers individually in waxed paper. But I’ve not been able to keep them around long enough to tell you how long they will last that way. 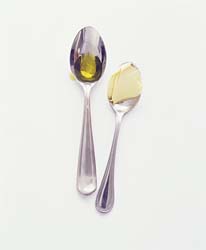 There have been many anthropological and historical studies done in the Mediterranean that try to determine whether there are significant cultural and social differences in areas where butter versus olive oil is the predominant fat used in the cuisine. This is called the olive oil-butter line. It makes a ring around the Mediterranean and certainly says a great deal about climate. As an anthropologist, I am not sure I buy this fat argument entirely, but these areas certainly have very different forms of cuisine. However, I think this largely due to the weather. That said, it is amazing how much butter and oil can influence culinary practices and nutrition.

Here in Piedmont, butter reigns supreme. Polenta is garnished with butter and cheese such as fontina (polenta concia). Risotto would be nearly unthinkable without those last dollops of butter that sweat into the rice when it is nearly finished cooking. While, in contrast, Umbrian dishes are finished with a filo d’olio (a drizzle of olive oil). Certainly lentil soup just wouldn’t be complete without this finishing touch. In fact, good olive oil is nearly always used on roasted meats and vegetables just before they are served.

I am hoping soon to make down past the butter line and to indulge in some wonderful Mediterranean culture and cuisine garnished with an extra splash of extra virgin. 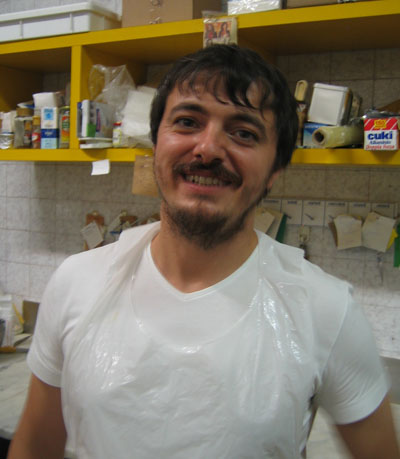 Olive oil is often a wonderful supplement for butter in many recipes for cakes and cookies. However, I recently heard one of the most interesting (and perhaps intellectual) recipes for using olive oil.

After I recovered from eating all of that cheese last weekend, I received an invitation to visit the Laboratorio di resistenza dolciaria in Alba. The name literally translates to the Laboratory of the Sweet Resistance and this pastry shop stands in sharp contrast to Ferrero an their industrial produced Kinder snacks and sweets. How could I resist! After being introduced to Federico, the owner and head pastry chef, we chatted for a while and then he invited me to give him a hand making baci di dama. It was great just to work along side Federico and Annette, a student from the University of Gastronomic Sciences. We talked about our passions for food, our ideas and our experiences.

Federico explained a cake that he had invented: it was supposed to symbolise the trip he had made through Liguria north to south. The base of the cake is chestnut flour (a type of flour often frowned upon in Italy because of its association with hunger during the Second World War), eggs as well as yogurt made from goats’ milk. Federico told me the cake is quite dry so he serves it with olive oil. I had heard of putting olive oil in a cake but never of using it finish a cake.

I like the idea that a dish can communicate a landscape or a voyage. Food can make us dream and travel without even leaving the table. Bravo, Federico!

Yes, I found some beautiful cheese from Lazio sott’olio. It was one of the first cheeses I had seen preserved in olive oil (rather than seed oil). It is called Marzolina and it is a cheese made from goats’ milk. Originally, this cheese was only produced once a year in March (hence the name) and it was preserved in oil so it could be enjoyed throughout the year. Marzolina is now a Slow Food presidium.